Continuing the process of presenting my proposal for the graduation project, I was required to do a presentation. Now, I have never really liked PowerPoint and for more reasons than it being a product of Microsoft (I was never really into OpenOffice.org Impress either).

In fact, I have never liked doing presentations in the first place. My preferred means of communicating an idea is through written material or face-to-face discussions. Anyhow, seeing as I had to do a formal presentation, I turned towards the solution that would provide some additional attraction for me:

After fiddling around with my .tex for a few hours, I was able to create something which looked [*] far more professional, sexier and informative than anything I had ever created using traditional presentation software: 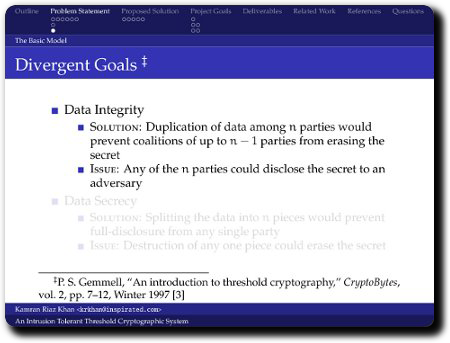 To view the presentation you have to open it in “Slide Show” mode of your favorite PDF reader. What totally blew me away was the ease with which I could create lovely bibliographic references, mathematical equations and little fun things like navigational bar on top of every page. Perhaps it’s got to do something with the mindset of a programmer, but I certainly became more productive with Beamer within a couple of hours than I had been throughout my experience with PowerPoint/Impress.

[*] Whether they were professional, sexy or informative is a totally different matter and has very little to do with either LaTeX or Beamer.

“Houston, Tranquility Base here. The Proposal has landed.”

Baffling all reason known to mankind, I have somehow entered my final year of engineering — that is, after earning every conceivable grade on my transcript. As is the custom, I was supposed to work on a graduation project and the first step included presenting a proposal and defending it. Brainstorming sessions for a project idea left me with classical stuff such as HAL-9000 or the Nebuchadnezzar hovercraft. At which point I decided that I simply wasn’t creative enough to come up with an idea on my own and asked around for help. After a few days of frantic Googling and inept socializing with senior academia members, I finally found something which at least managed to sound horrible: an Intrusion Tolerant Threshold Cryptographic System.

The proposal can be found at this link. If the contents seem a bit sparse to you, reread the title as “A Not-At-All Fault Tolerant Attempt at Getting to Grips with

“. Although, I’m not entirely sure my attempts at doing something with latex were more successful than Geroge’s.

“And you wanted to be my latex salesman.” — Jerry Seinfeld