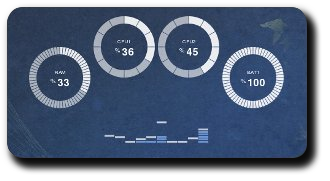 Xfce is a light-weight desktop environment which, in my opinion, balances the resources vs. features graph in the best possible way. Until last week, the latest stable version of Xfce was 4.2, while 4.4 release candidates had been rolling out since mid-2006. The 4.4 version promised some very exciting features, such as the new Thunar File Manager but was, not surprisingly, never incorporated in mainstream distributions such as Fedora or Ubuntu. Fans continued to compile it from source or install unofficial builds on their distributions, but there was no significant increase in its usage over this period as the general expectations of a modern desktop environment were lifted due to relatively shorter stable release cycles of Gnome and KDE. The situation should be changed now that Xfce has finally released the much awaited stable upgrade.

Xfce was one of the first desktop environments to include its own compositing manager with its default window manager. The whole thing was quite sexy without taking huge chunks of memory either. In my experience, an Xfce desktop can look really cool while using only 80-100 MB of RAM. Back in the days when I had Xfwm4 as my default window manager, the setup shown in the following screenshot ran quite smoothly on a 733 MHz P3 with 128 MB of RAM!

(No one can deny the fact though that once someone uses Beryl/Emerald, all other window managers of the universe start to look ultra-boring. That’s why my normal setup consists of both Beryl and Xfce, and it’s quite a treat.)

I’ll be reviewing the 4.4 release as soon as I get back to my PC in February. It’s really hard being away from your beloved C2D processor that compiles a whole kernel in 20 minutes, and using a P3 processor which compiles the same thing in approximately two hours. It’s like going to a movie with a talkative nauseous wife after having seen the same thing with a gorgeous taciturn girlfriend on the night before!