Summing up Google Summer of Code 2011

Due to a number of commitments which I had pinned back during the summer for GSoC I was unable to attend much to the Internet over the past few weeks. Now that I’m back a summary of this year’s coding festival is in order:

This year I was working with Electronic Frontier Foundation/The Tor Project for improving the Anonymizing Relay Monitor (arm). The original proposal can be downloaded from this link are accessed via a browser at Google Docs. However, do note that not all of the goals from the proposal were met. Some were modified, some were removed altogether while some new ones were added — the details of which I’ll be explaining in the following sections.

Overall the program has been an extraordinarily enjoyable and learning experience for me. My involvement with Ubuntu last year had already taught me how invaluable it is to merge with your mentoring organizing’s developer community. This year most of my collaboration took place in #tor-dev on OFTC. Many times when I was stuck or heading towards an improper direction with my code the core Tor developers helped me and provided advice for design decisions as well as general guidance about the way things work in Tor. It wasn’t only a privilege to be helped by such rockstars, but was also vital as I can see in hindsight how disastrous it would have been if I had attempted to work through the program entirely on my own.

A huge thanks goes to my mentor Damian. Most of the credit for making this program an enjoyable and stimulating experience for me goes directly to him. He has one of the best combinations of code-people skills among people I’ve known. I would’ve loved meeting him and the Tor community in PETS ’11 but couldn’t travel due to some paperwork fiasco which was entirely a result of my slothful attitude towards anything involving government offices. Nevertheless, I do hope to meet the guys next year in PETS ’12.

In order to not sound repetitious, I’ll provide a quick summary of the milestones while linking to the posts which explain them in detail:

My first task was to add dropdown menus for the curses interface to arm. Even though the menus were replaced by Damian’s rewrite, they went a long way in helping me assimilate myself with the arm codebase: 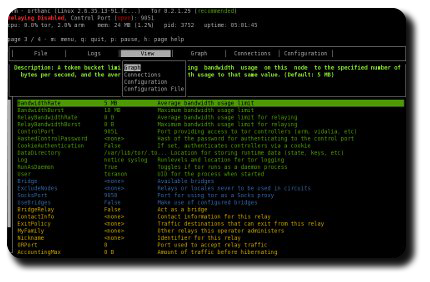 Graphs and logs for arm GUI

GTK+ was chosen as the toolkit for developing the arm GUI prototype. While GTK+ has its own disadvantages when compared to Qt (platform portability — or the lack thereof — being the foremost), it fared well in light-weight Unix environment such as Live CDs (e.g., Tails). Bandwidth graphs and logs for various arm events were added to the prototype: 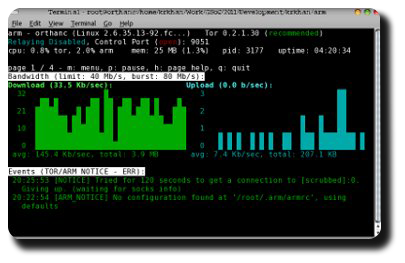 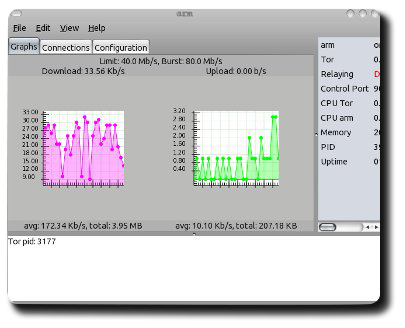 Moving on with the GUI, next up was to improve its conformity with the rest of the user’s desktop: 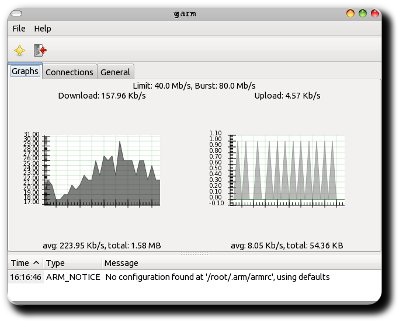 And then re-use arm’s CLI connection resolvers in order to display stats about Tor circuits and control connections: 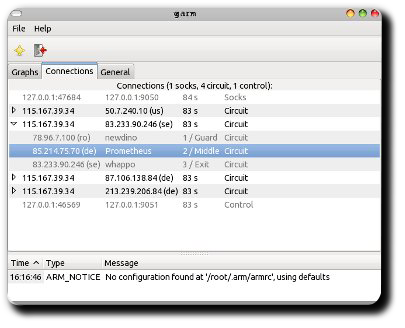 A small addition was migration of the “sticky” panel from CLI which was moved under a “General” tab and provided miscellaneous info about Tor and arm: 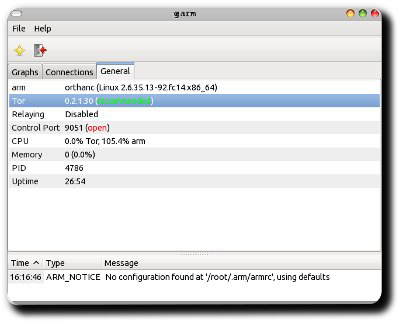 Another important panel in the arm CLI was its configuration interface which provided a nice and documented approach to altering Tor’s settings. It was migrated to GUI with nice dialogs for validating user input: 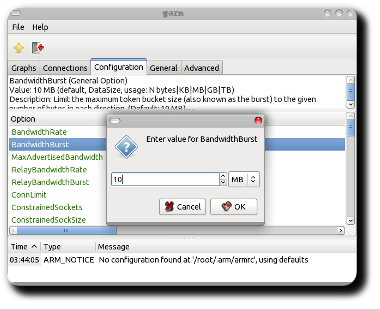 Along with the configuration panel a few patches to Tor and Vidalia were developed which would allow arm to be notified of changes made by an external program via a CONF_CHANGED event. The support for CONF_CHANGED still isn’t solid in all Tor controllers yet which I plan on addressing in coming months.

A popular feature request among Tor users was to be able to select the country for their exit nodes. While I initially planned on providing them more fine-grained control over their circuits (such as path length), Tor developers advised against it and hence the selection was limited to the exit-node’s locale: 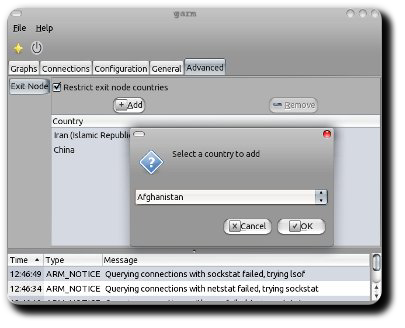 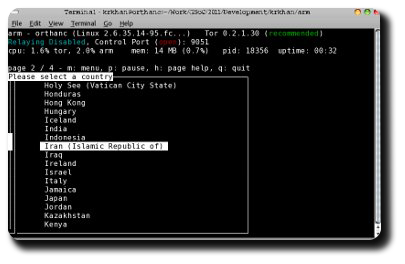 It’s just that awesome, seriously. Stars from the FLOSS strata gather around and help inexperienced and aspiring developers all over the globe for two months in order to bring more code and — more importantly — more people to the open-source world. The experience with GSoC not only helps me in general open-source development, but also proves to be priceless at my workplace for my research in software defined networks. If you’re even remotely interested in open-source do keep an eye on the program’s website for future updates.