I had never really laid my hands on LaTeX until I required it in one of the helper applications for my graduation project. Unfortunately, the requirement wasn’t as simple as producing some documents as I had to embed mathematical expressions on the fly in my PyGTK apps. Googling around for the solution, I found GtkMathView which accomplished something similar to this albeit using MathML. However, my luck ran out on me again as the widget lacked Python bindings. The other solution was to generate transparent PNGs on the fly and include them as GtkImages. This worked rather well, as the final code allowed easy modifications to the generated expressions.

Requirements for the code were: 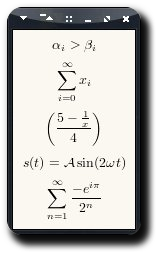 And the simple code behind it: