“Anyone who slaps a ‘this page is best viewed with Browser X’ label on a Web page appears to be yearning for the bad old days, before the Web, when you had very little chance of reading a document written on another computer, another word processor, or another network.” — Tim Berners-Lee in Technology Review, July 1996

People never learn. Slapping such labels is one thing, they even go as far as adopting brain-dead practices of checking user-agent strings and refusing service to any browser not originating from Redmond. For example, Opera Mobile — the sexiest mobile application on planet — works astonishingly well for Javascript websites. Nevertheless, when trying to browse my university’s academic management portal on it I am presented with a big ugly “We’re dumb, you need to open this page with Internet Explorer 6.0 or later because it uses JAVASCRIPTXX0RZ.” Even though Opera does allow spoofing of user-agent strings, the fake strings still contained “Symbian” as the operating system which still resulted in incompatibility errors.

As ever, Python came to the rescue. Firing up the Twisted framework, I created a simple HTTP proxy which modifies the user-agent string on the fly. Peaches: 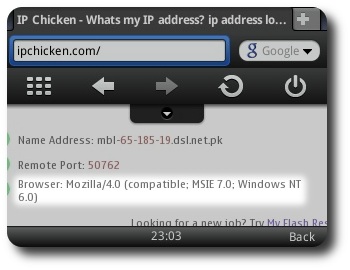 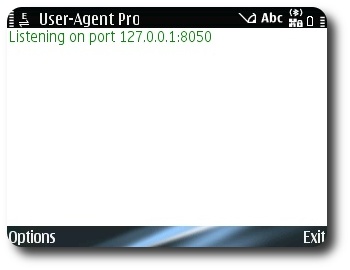 The script is still very quirky and is the farthest thing from what you’d call a stable solution. You can download the inital release here. The zip file contains the tiny proxy server script as well as Twisted and Zope dependencies. Good luck with trying to counter retards who’re doing everything they can to avoid compatibility. Yes, even 14 years after Sir Tim’s veracious proclamation.