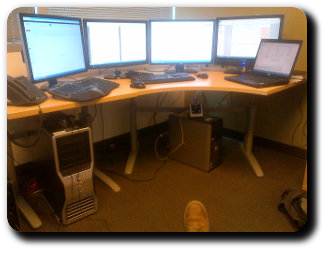 “Two heads are better than one.”

Not everything is going perfect (I’ll get to that later), but it is an awesome feeling to be able to manage different windows on a 2048-pixels wide workspace.

The laptop is providing the VGA output using the Intel driver that’s included in X.org. However, to get the thing working, I had to edit my xorg.conf by hand. Here’s a list of things that work:

I have yet to try a 2560×800 (1280×800+1280×800) configuration but the current resolution is still more than sufficient for some kickass photo/video editing. Also, debugging on one display while vim-ing in the other is a programmer’s paradise. Size does matter, after all.