The final weeks of GSoC 2011 were spent by me working on exit node selection for Tor users. The GUI controller can now be used to define a list of countries, after which only those exit nodes shall be used which lie in one of the specified territories: 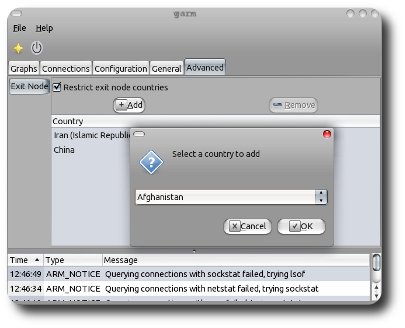 For the CLI, Damian decided that the general use case for exit node selection is specification of a single country so pressing ‘E’ in the connections panel brings up a list from which one can be chosen: 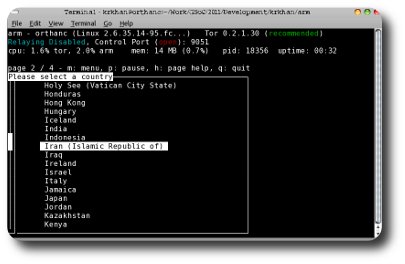 Please note that the exit node restriction works only for circuits built after the selection. Therefore it might be a good idea to send a NEWNYM to Tor after specifying the countries — which you’ll have to do manually for the time being until I add the feature to (g)arm controllers.

In my next post I’ll cover a summary of my involvement with GSoC this year, that is, after I finish with the regular chores of code submission etc.