As the initial stage of my GSoC project is heavily involved with the Launchpad core, the first step for being ready was to get it running in a clean lean virtual machine. Bad rhyming I know. But trust me, trying to setup Launchpad locally with a borked internet connection is worse.

So, after some ∞ attempts at using rocketfuel-setup, I got stuck because my internet gave up on each run before Bazaar repositories could download. To top it off, once the repositories did download the VM decided to become unresponsive as it had only 384 MB of RAM and unpacking a huge repository like Launchpad’s core required a lot more resources than that.

Love for open-source followed as I downloaded the repositories on a separate machine, transferred them to the VM using NFS and then was able to modify the rocketfuel-setup so that it would do only the remaining work. The result: 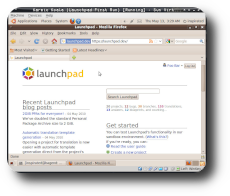 The added bonus of doing the whole process on VM was the ability to go back to a clean state in case something went haywire. A few months ago, I had moved over to Sun’s VirtualBox from Redhat’s Virtual Machine Manager and this proved to be helpful on many accounts. Apart from being sleeker and more friendlier, VirtualBox offers advanced features such as PulseAudio integration on host and hierarchical snapshots. Using the shots, now I can just select a state where Launchpad was launched clean … : 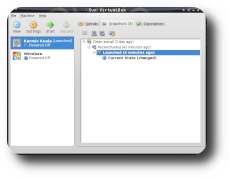 … click on restore and viola, I’ll have the same instance up and running again within a few seconds.